I’ve been painting and sketching native oysters, Ostrea edulis.  I buy them from oyster fishermen at Mylor in Cornwall near Falmouth. It was bitterly cold then and it’s pretty cold now. 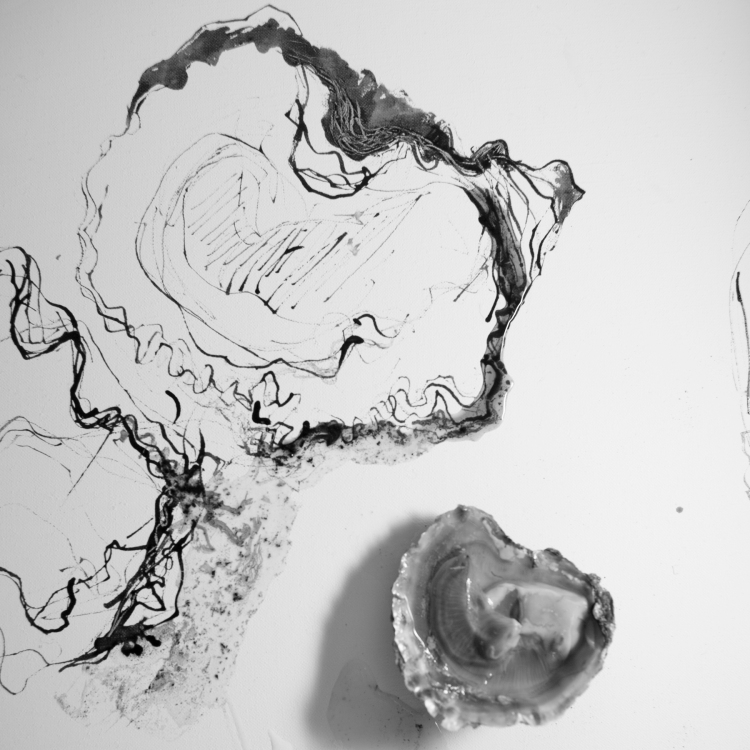 It takes a long time to establish a native oyster bed. They were a major source of cheap food. In 1851, for example, a round 500 million oysters were sold through Billingsgate. Our oyster beds were destroyed by a series of cold winters, surely not the first though, in the mid 20th Century, and then pollution, the parasite, Bonnania Ostrea, the beastly slipper limpets and oyster drills which drill holes into them and eat it contents, they are a big threat for commercial oyster farms. 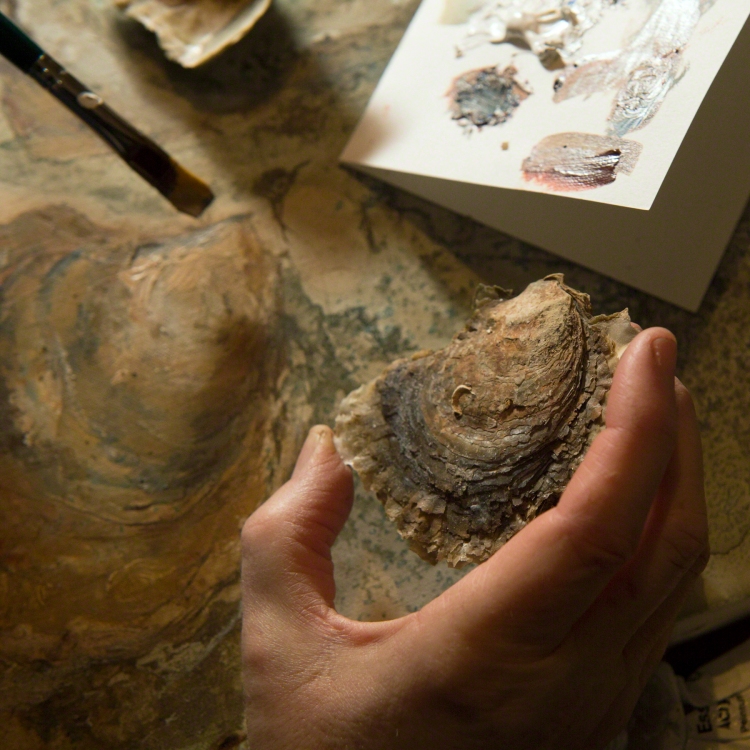 Now they can only be collected under license in Scotland. 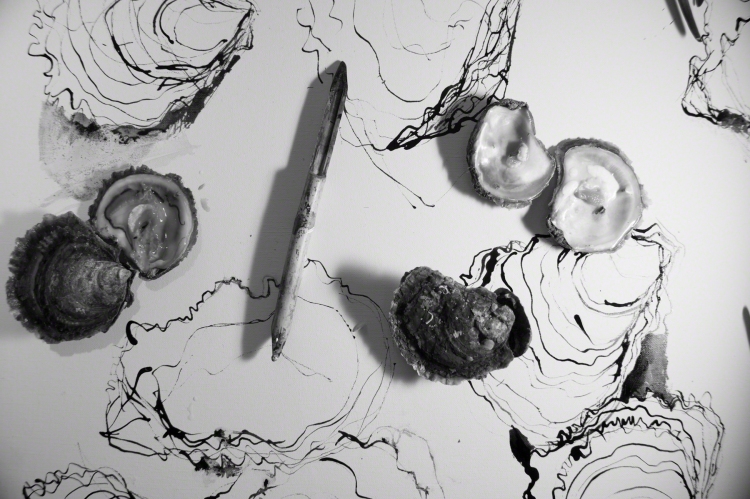 Oysters change back and forth from female to male according to the temperature of the water. You get in the bath nice and hot, go to sleep, and wake up in cold water, surprisingly different. Well, surprising the first time, but native oysters can live for 20 years so they may get used to it.

All photographs by James Forshall 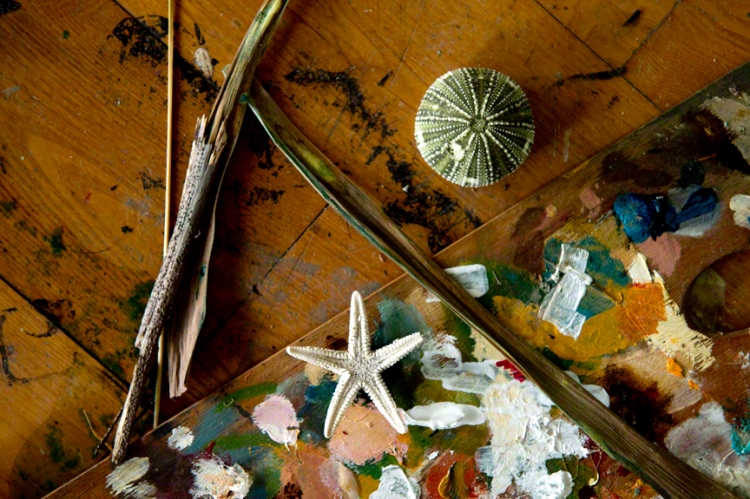 This  detail of my studio floor caught my eye.  The sea urchin became part of one of my paintings currently on show at the Flying Colours Gallery in Chelsea, London. See if you can find it there. The show, called Coast, on until 11th December, is made up of paintings of the last two years, of all sorts of sea creatures, as well as seascapes. 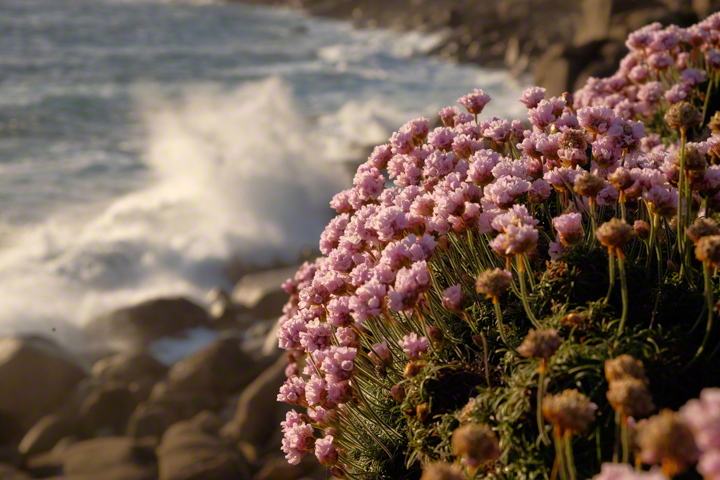 We’ve been down to Gwenver Beach. We walked along the path towards the cliffs in the evening light. There was quite a swell and the waves were breaking on the rocks.

The next day we picnicked on the beach. Even though the sun was bright the wind was cold. I sat sketching in the dunes. I’m working for a show to be called ‘Coast’ at the ‘Flying Colours Gallery’, Chelsea, in November. There is a lot of work to do. I’ll be showing fish and shell paintings but also paintings of flowers associated with the sea. 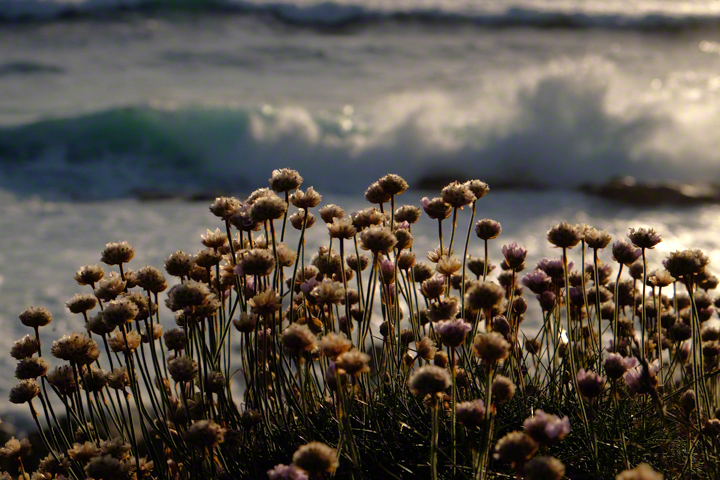 Much of the sea thrift was already pollinated and had gone to seed. As well as the bees it attracts a daylight moth, the Five Spot Burnett, Zygaena Trifolii, and a small snail, the name of which I do not know, which happily munches its way through the pink petals, pollinated or not. 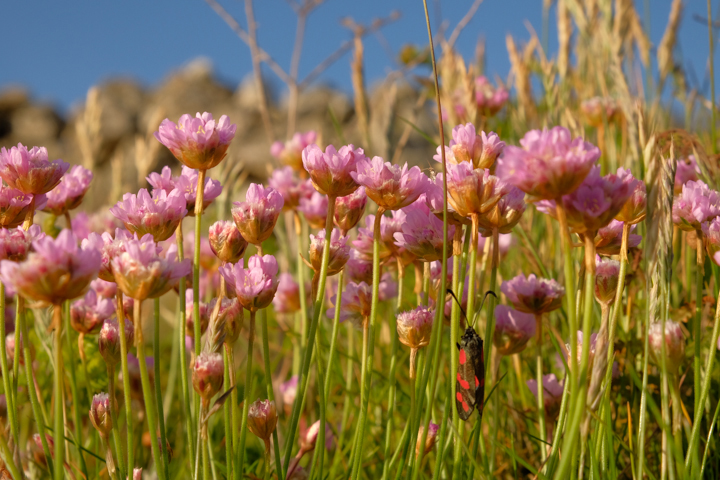 It’s a lovely place, not far from Sennen Cove in Cornwall. There is a long steep walk down but it’s worth it. 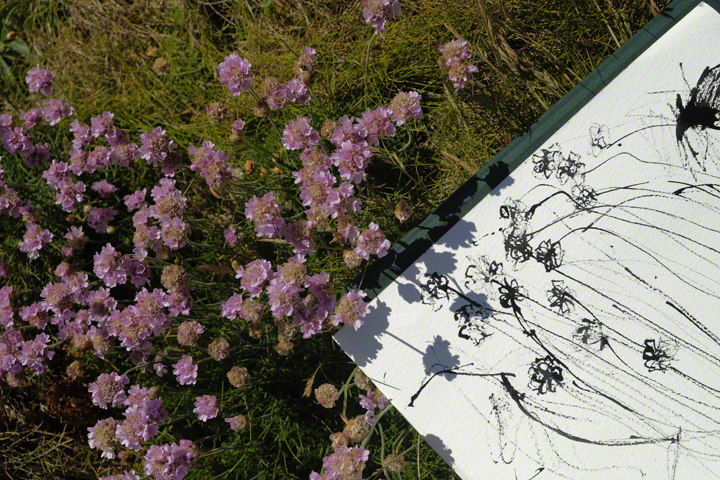 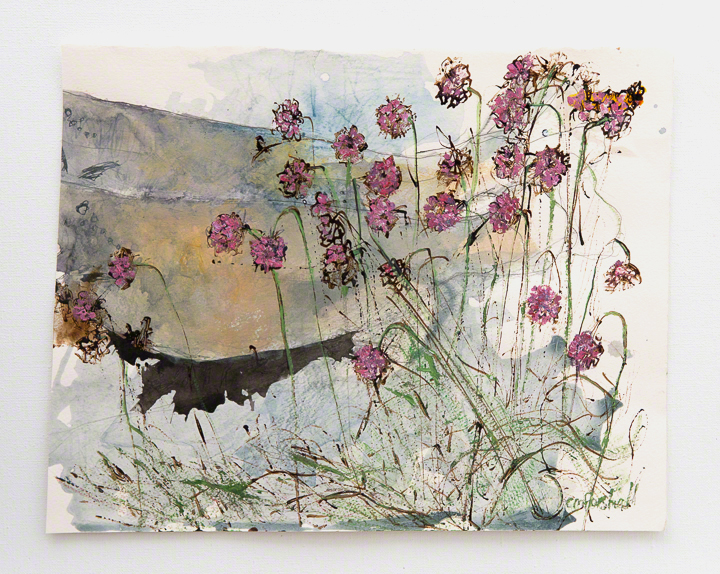 If you would like to be kept informed of forthcoming shows please email me at catherineforshall@yahoo.co.uk 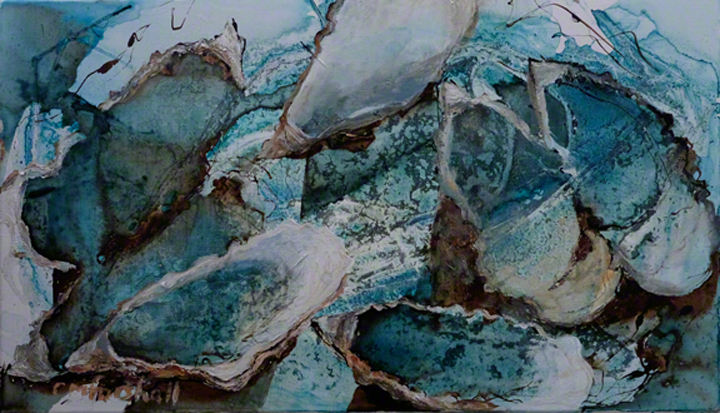 They are the shells of the Pacific oyster and they are on the way to the Moncrieff- Bray Gallery, which will take them to the 20/21 International Art Fair at the Royal College of Art, Kensington Gore, London SW7 2EU, running from the 14 – 17th May 2015.

I’ve been working on a large canvas of sea shells 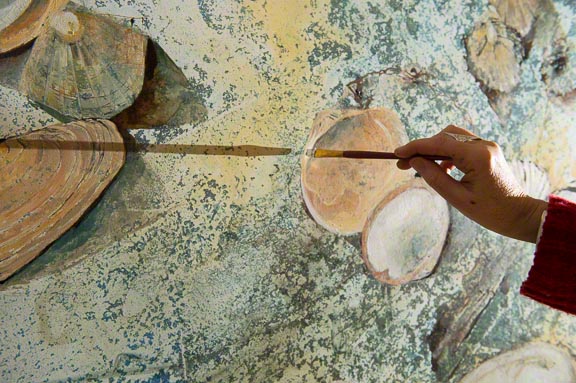 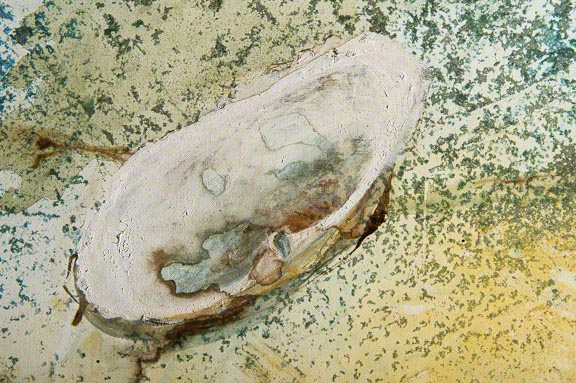 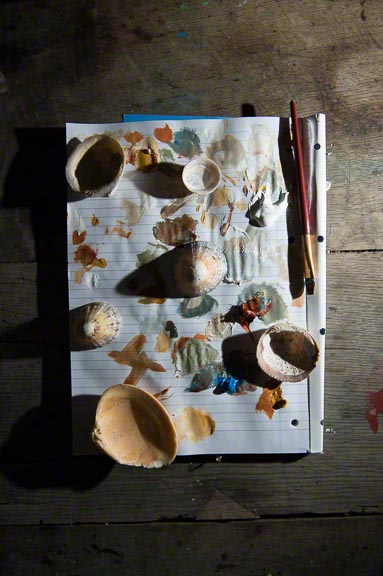 This is my palette.  I use anything to hand: a piece of old card board, a used envelope, or in this case a pad of lined refill paper.  I do have a proper palette but I find it a bit heavy. In this case I used the palette for mixing paint but also to display the shells which I am using as reference. 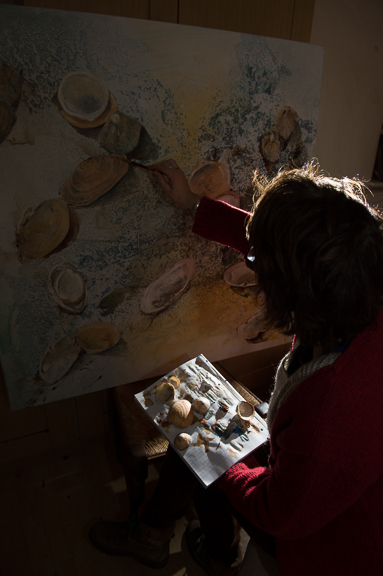 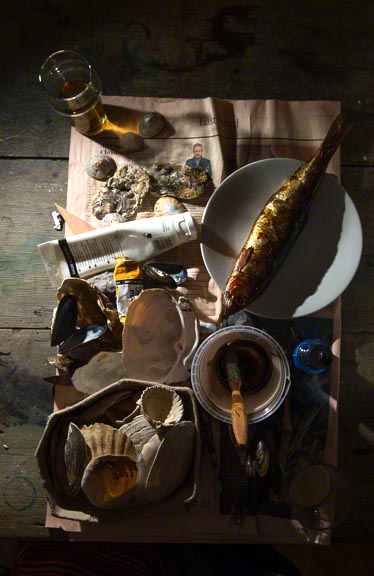 This is a collection of objects which I have used while painting ‘Low Tide’ and another recent painting, ‘Vortex’, the kind of things you’d find on the tide line, bottles, bit’s of bamboo, a yoghurt pot, a dead fish, seashells, a bit of old newspaper but all tidied, compressed into this rectangle after work. The liquid in the glass is diluted ink. 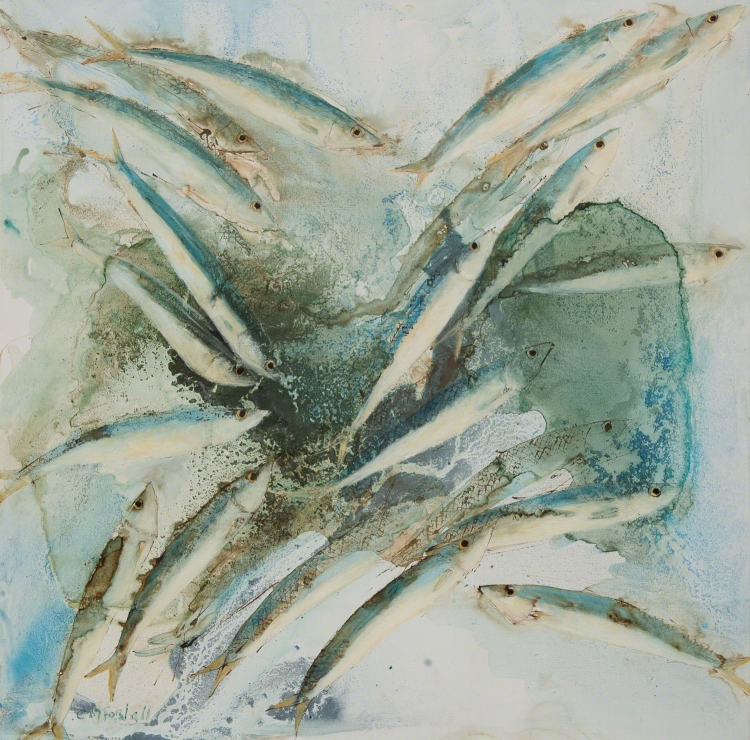 This shoal of fish has been moving around my house as I work on it.  They’ve spent quite a lot of time in the kitchen. I look at it in different lights and in different places and now that I’m happy with it I’ve signed it and the shoal will be traveling in a van to the Moncrieff-Bray Gallery, near Petworth, West Sussex.

I’m sketching a spider crab on paper. I propped him up with a shell. 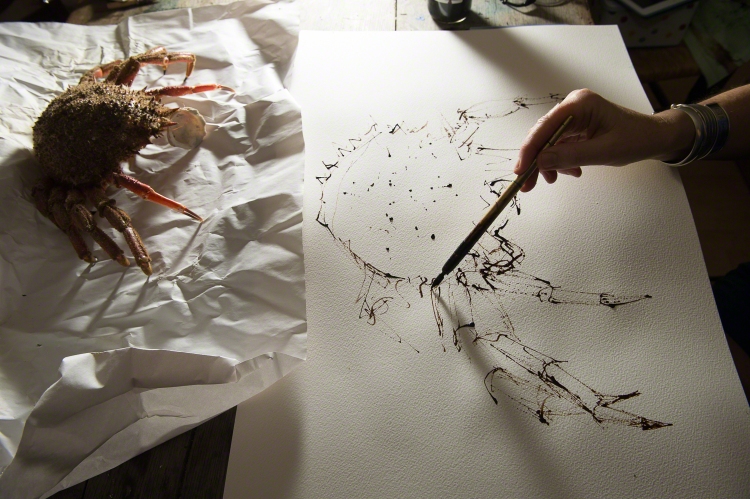 The spider crab (maja squinado) is common in British coastal waters. For some reason he or she is not a popular food here. Perhaps its their thorny appearance.  They are very strange looking.  Here most that are caught are exported to the continent where the strange appearance of food is sometimes part of it’s attraction. 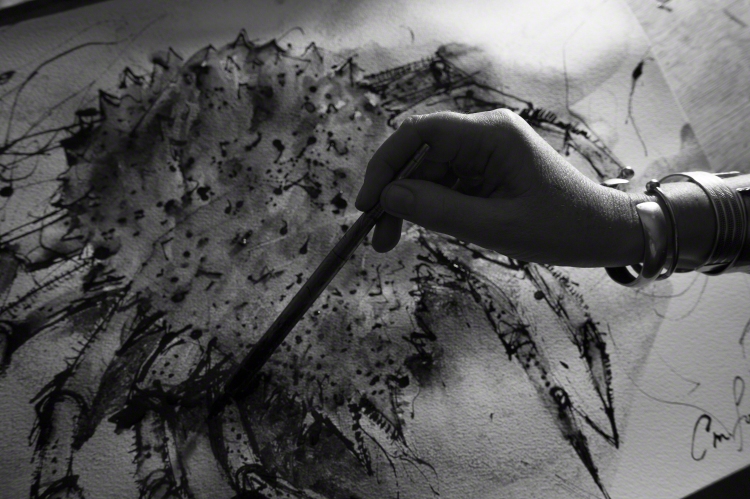 Seen from above the body shell is almost heart shaped, though lacking the indentation in the top of the heart, but coming down to two horns either side of the small eyes on storks.  It has eight walking legs and two large front claws for fighting and harvesting.  Oddly the front legs on the one I’m sketching are thin and undeveloped. Perhaps it is a juvenile. 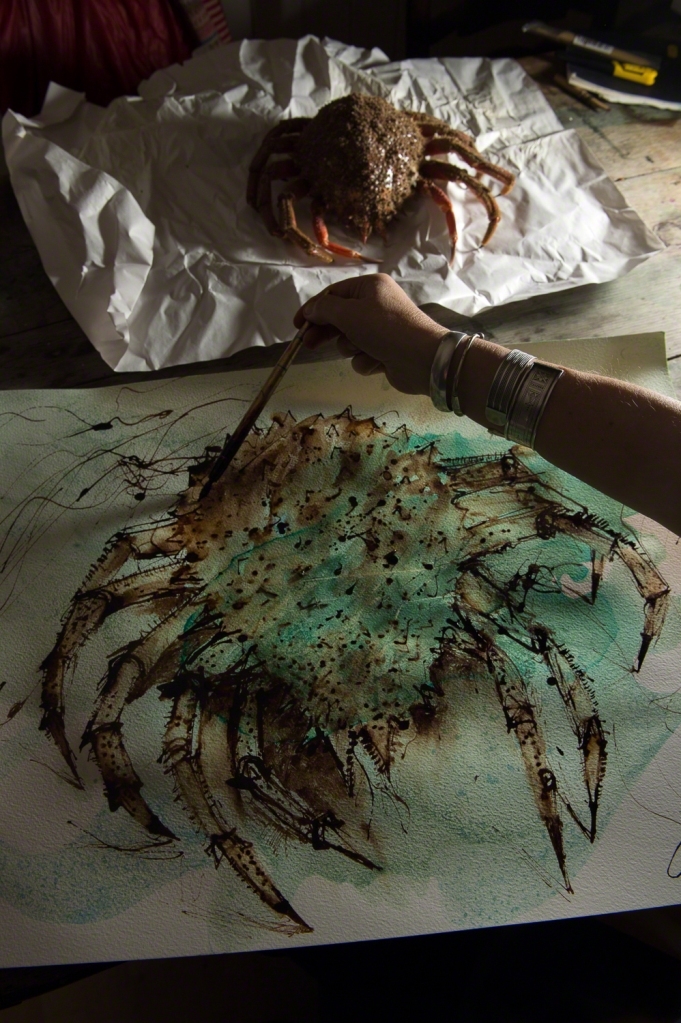 I like their spiky architectural appearance combined with their curves. 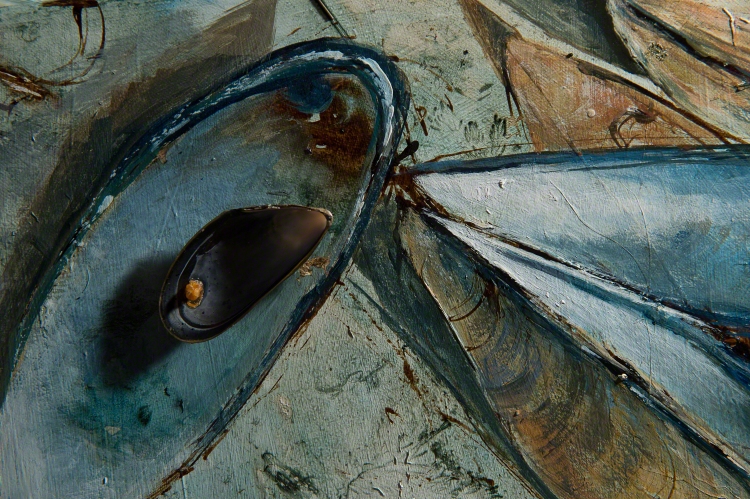 I am preparing a few paintings for the Moncrief-Bray Gallery, Petworth.  This one, as you can see, is of Mussels (Mytilus Edulis).  I’ve always loved them, for the colour of their shells and their succulent, richly scented, golden flesh. As children we would gather them at low tide, wrenching them off the shining black rocks to fry them in butter. 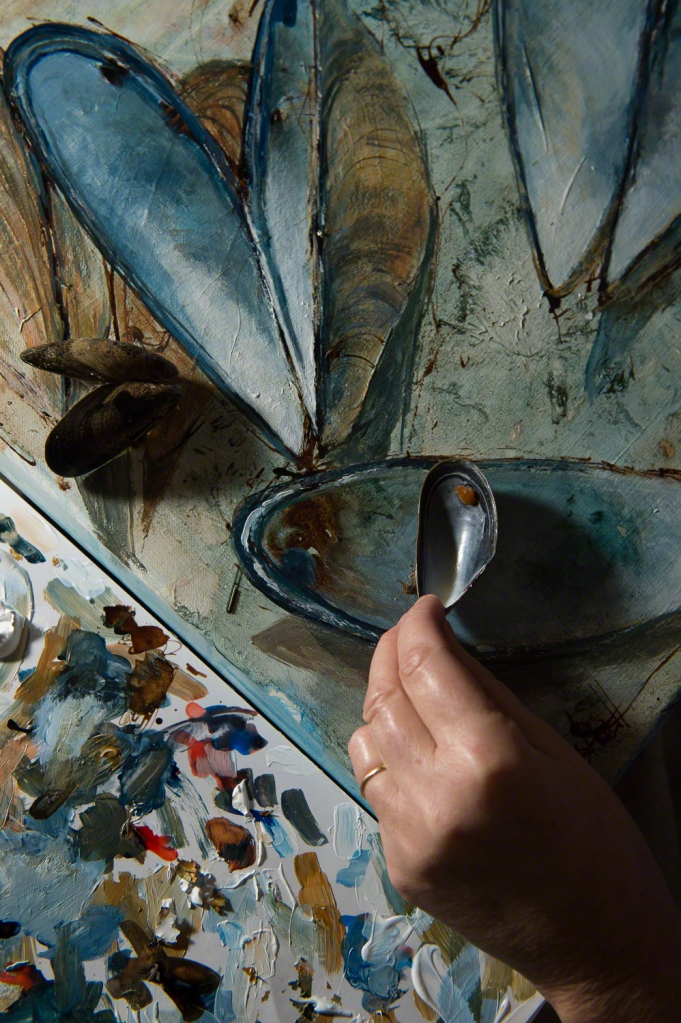 It is thought that Mussels have been cultivated for 800 years. In Scotland prehistoric settlements can be identified by the piles of mussels shells beside them. Mussels feed on plankton and to do this, these little creatures filter up to 65 litres of water a day. Their mortal enemy is the unattractively named dog whelk which bores a hole in their shell in order to suck out the soft body, which may be greedy and unkind, but can you blame them? Their prey are full of minerals and protein, but with less fat than beef. If I had to come back as a shellfish I’d be a dog whelk. 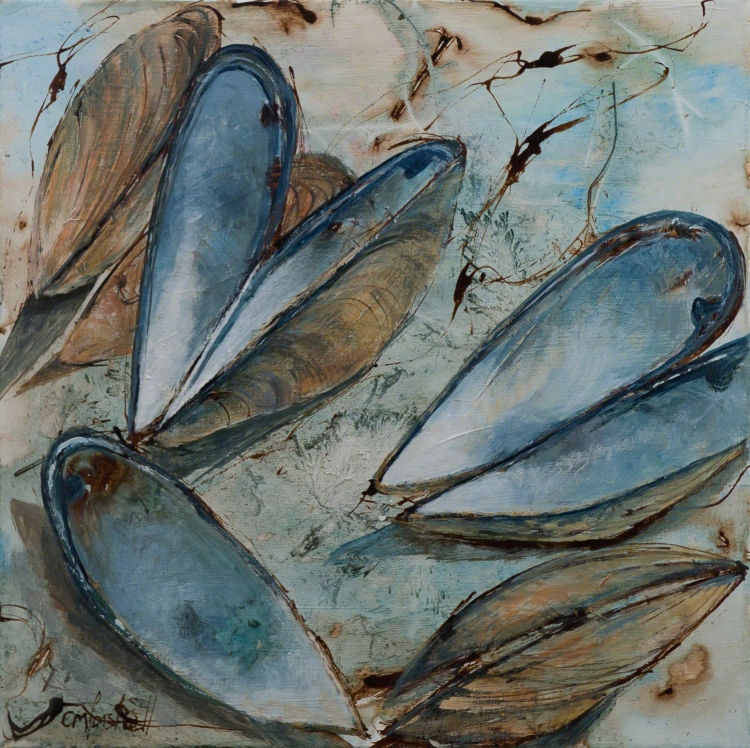 The painting will be on show at 20/21 Art Fair with the Moncrieff-Bray Gallery at the Royal College of Art 14th to 17th May.

I’ve been painting and sketching this lobster for a long time.  He has gone off.   There is a strong smell of bouillabaisse, but not as nice.  Our collie, Fizz, sniffs it appreciatively though. 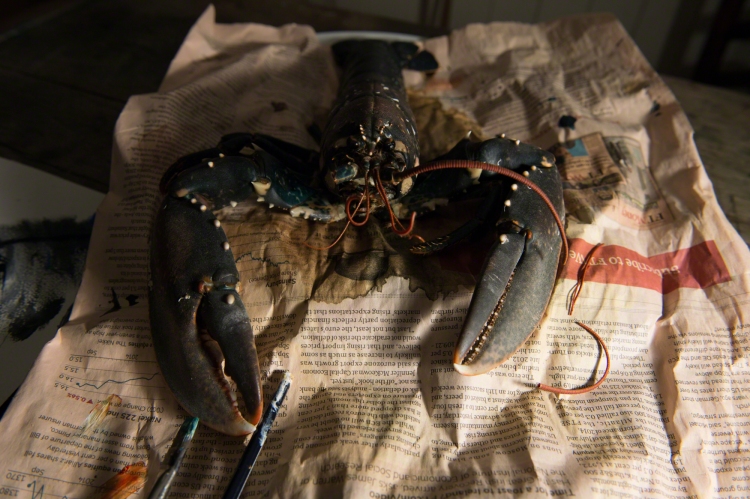 I find him strangely comforting.

I can’t visit the Aquarium in Plymouth often, so my local fish monger, Richard of Gibson’s Plaice in Exeter supplies me with fish he buys down in Brixham. Of course they are dead. The colours go off quickly. 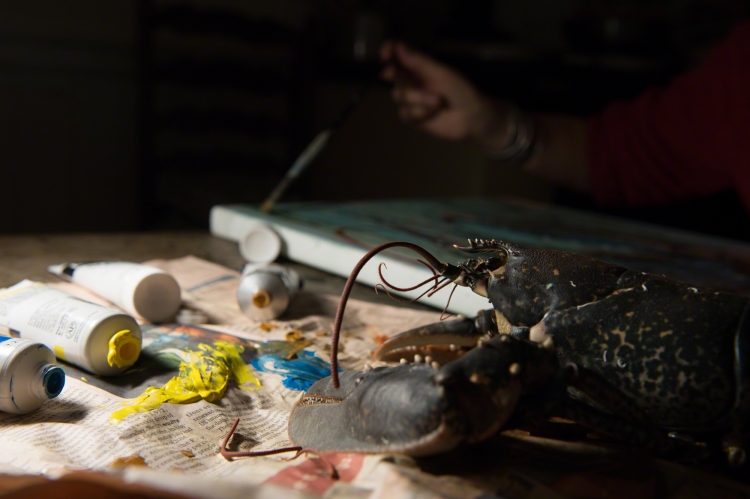 When I received this lobster he was frozen. A fine dusting of frost covered him. One of his antennae had broken. 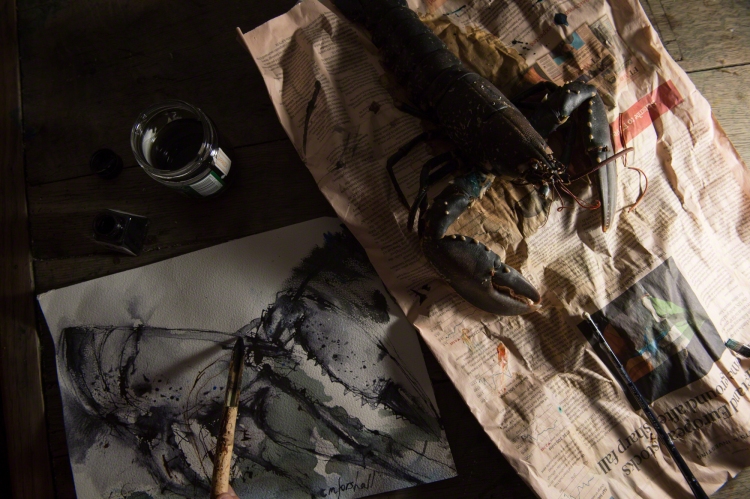 I started by sketching him and then I painted him.  I have to imagine him alive. By the time I had finished he had turned from blue to black. 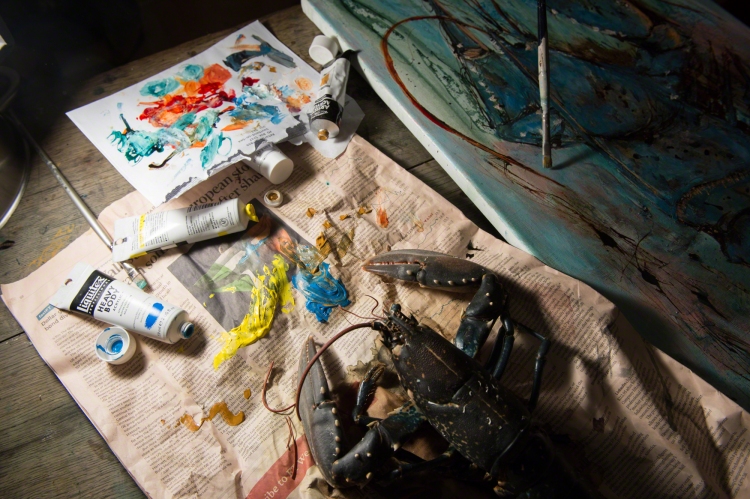