When I think of horse chestnut trees they always seem to be in public places: a village square in France, near a statue, by a park, on the edge of a cricket pitch. Perhaps that is because they are so flamboyant, exuberant, decorative. They are not really natives being imported from northern Greece or Albania in 1616, the year that Pocahontas, her husband John Rolfe and their son Thomas arrived in England,  and the year that Sir Walter Raleigh was released from The Tower to lead his doomed quest to find El Dorado. 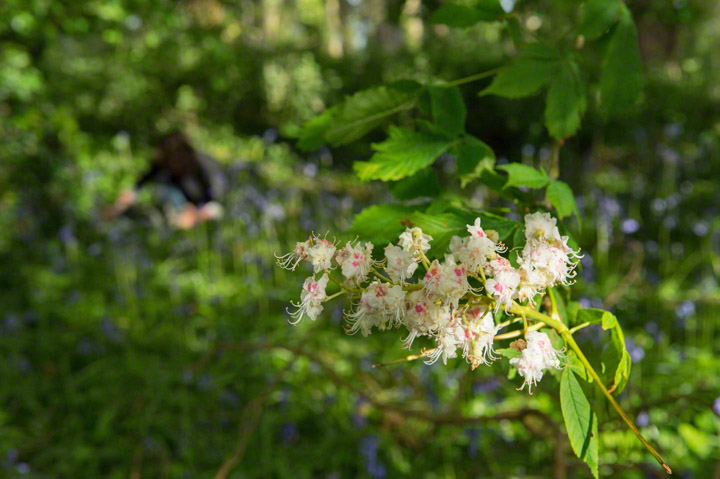 The tree is on the edge of the track which leads through the woods to the house, so perhaps it used to be a more public place. Now, though, it is almost hidden and probably not seen in flower by anybody from one year to the next. When I see the candles I know that spring has sprung and summer has begun. I walked up to the wood to sketch them, breaking off a candle and pushing away the branches to kneel among the bluebells and ivy in the shade of the tree with my sketch books.

Later I took the some flowers home to paint. They don’t last long. I had to work quickly.

Detail from Candles and Sea painting

You can see my work now  at the Montcrieff-Bray gallery near Petworth in Sussex.

The show has just started and is on until the 20th June.

One thought on “Candles (Aesculus hippocastanum) at Great Fulford”